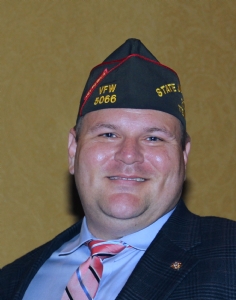 Brian Walker was born in Bristol, PA and grew up in Fairless Hills, PA. In 1992, his family moved to McCalla, AL where he graduated from McAdory High School in 1998. Brian joined the Air Force in May of 2003. Brian assessments were Holloman Air Force Base and the 164th Air Wing Memphis. He deployed 2009-2010 for Operation Enduring Freedom. His decorations include: Air Force Commendation Medal, Air Force Achievement Medal, Air Force Expeditionary Ribbon with Gold Combat Boarder, GWOT Expeditionary Medal, Military Outstanding Volunteer Service Medal, Outstanding Unit with Valor, and the Tennessee Ribbon for Valor. 2008, Brian was Airman of the Air for the 164AW.  In 2011, he was honored as a Tennessee Colonel Aide De Camp by Governor Haslam and was the Career Advisor for the Southeastern United States.  Brian served four years as post commander for 1965 and 5066. Brian oversaw the merger of 1965 and 5066. He was All-State all four years and All-American the last three years. Brian is married to Elizabeth (Ginn) and they have two boys Austin (19) and Noah (3).