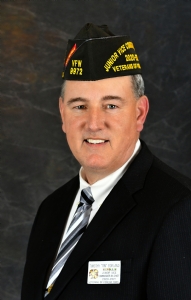 Timothy M. Borland was elected Junior Vice Commander-in-Chief of the Veterans of Foreign Wars of the U.S. on August 20, 2020, at the VFW National Council of Administration meeting.
Tim served in the United States Army from 1979 to 2007, last serving with the 101st Airborne Division, earning his VFW eligibility serving in Korea and Iraq. In recognition of his service, he received four Meritorious Service Medals, four Army Commendation Medals, eight Army Achievement Medals, nine Good Conduct Medals, the Army Reserve Components Achievement Medal, the National Defense Service Medal, the Iraq Campaign Medal, the Global War on Terrorism Expeditionary Medal, and the Korea Defense Service Medal, among numerous others medals and ribbons.
He became a Life member of the VFW in 2000, and currently maintains his Gold Legacy Life membership at VFW Post 9972 in Sierra Vista, Arizona. He has served in elected and appointed positions at the Post, District and Department levels, culminating with his election as the VFW Department of Arizona Commander from 2011 to 2012, in which he earned the distinction of All-American status and also received the distinguished Triple Crown Award. On the national level, Tim has served on several committees, including the National Council of Administration from 2012 to 2016, Vice Chairman of the National Legislative Committee from 2017 to 2018, Chairman of the National Programs Committee from 2018 to 2019, National Security and Foreign Affairs Committee, Bylaws and Resolution Committee, Time and Place Committee, and numerous other committees.
Tim received his Bachelor of Arts and Master of Business Administration degrees from Touro University in Cypress, California. Tim is retired.
He is also a member of AMVETS, American Legion, and a life member of Disabled American Veterans.
Tim and his wife, Shannon, reside in Benson, Arizona.
-vfw-
Timothy M. Borland
Junior Vice Commander-in-Chief
Veterans of Foreign Wars of the United States